I was lucky to be able to sign up for the Rum Experience University this year:

“… The Rum Experience have started a Rum Experience University which provides students with information about the rum trade. It covers rum and its production and advertising.” – RumFest UK

The event was held on the Friday before the RumFest weekend. The first session started at around 10:30AM, which was with the Master Blender Tito Cordero of Diplomatico of Venezuela.

Tito had his other English-speaking member of the Diplomatico family present to be his interpreter for the session.

The session was very informative, and as you would expect, the topics covered were related to Diplomatico history and their rum making process. We had the chance to try rums from different stages of the aging process. Unfortunately we were only able to try the Anejo and Reserva, most if not all of us where hoping that they would have let us try the Single Vintage or Ambassador…

The second session was with Aroma Academy:

“The Aroma Academy provides customers with niche specialist Aroma and Perfume System Products and Master Classes that educate, entertain and/or improve the feeling of well-being. The customer base is wide ranging, covering both enthusiasts/connoisseurs and trade/industry with industry customers including many of the leading drinks and perfume companies.” – Aroma Academy 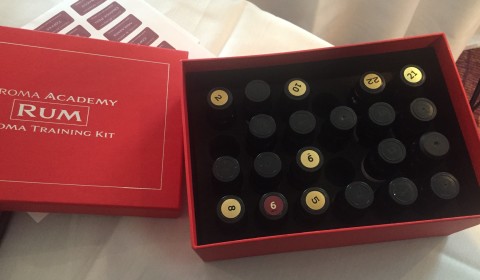 The session started with an introduction to the company and a bit of their history. This session was obviously related to Rum, therefore we were introduced to the newly created Rum Aroma kit, which was finalised in collaboration with the UK Rum Ambassador Ian Burrell

This was a very interesting session as I had never done something like that before. It was not easy to figure out the aromas that we were given. The aromas ranged from banana to burnt tires! The first part involved smelling the various samples individually and trying to figure out what they were.

In the second part of the session, we had three rums, and we had to write down the aromas that we could pick out on the nose. Both sessions involved a few minutes of discussion regarding the smell that people had picked. At the end of the session we were able to have a closer look at the new Rum Aroma kit, and we were told that it would be available this December.

The 3rd session was with the world renowned rum dude, Richard Seale!

“Master Distiller and Blender at R. L. Seale and Foursqure Distillery in Barbados. Richard Seale was born to make rum. He is the great grandson of the original Reginald Leon Seale who founded the company in 1926, making him the fourth generation to work in the family rum business. Richard serves as Master Distiller and Blender, as well as ambassador for all the rums which are produced at the family owned Foursquare Rum Distillery in Barbados. 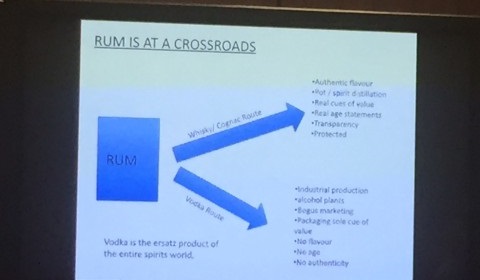 In 2011 Foursquare was the winner of three awards at the prestigious Golden Rum Barrel awards in London, UK. The distillery was named Distillery of the Year, Richard himself was awarded Distiller of the year.” – Legends of Rum

The session started with Richard Seale asking us to pick the vodka out of 4 different glasses. The room was a bit divided on choosing one, as two of the glasses stood out from the rest, as they smelt and tasted a bit like ethanol… I mean vodka.

The session was mainly focused on differentiating good rum from the not so good rums, and educating people to understand that a decent rum is a much more refined and versatile than a ‘premium’ vodka. Many pot still rums are regarded as highly as some of the top whiskies and cognacs by drinks connoisseurs, whisky and/or cognac lovers.

From his point of view, Pot Still rum is what authentic rum should be about, and for him that’s how rum was being made in the past, and that this method is the best way to get good a flavour profile from the rum. The main point of this talk was… in order to make a good rum, you need to start from a good base, which is a rum from a Pot Still. Single and multiple columns limit the flavour profile that can be produced to create a great rum.

Please don’t quote us on this… this is based on my understanding and interpretation of what was said on the day!

The final session was supposed to be with the UK rum ambassador Ian Burrell, but he kindly gave us the choice between a blind tasting, and spending the last few hours at the ‘The Boutique RumFest’. More or less all of us decided to go with the latter option, for obvious reasons! The rest is history… Well not quite.

If you want to find out our experience at ‘The Boutique RumFest‘ experience, check this blog post out!

0 comments on “The Rum Experience University – RumFest 2015”Add yours →