During RumFest UK 2015 we were fortunate to attend the Sunday Rum Blender masterclass organised by RumBlender.nl and hosted by Peter and Pauline Holland from TheFloatingRumShack.com.

We say ‘fortunate’, as normally the VIP ticket holders tend to snap these places first, which one can say is a bit unfair, or maybe that’s one of the perks of having a VIP ticket!  This masterclass had a very limited capacity of about 10 people. Entering the room, we were greeted by the beautiful sight of a table full of rum glasses, with rum of course. It looked like we were going to start some lab experiments, with a set of measuring cylinders and pipettes next to our A4 paper templates, where each of our rum glasses was placed on labelled circles.

Peter started the session by introducing himself and TheFloatingRumShack.com, and swiftly moved on to introducing the masterclass organiser; Rumblender.nl, who they are, where they are based, and what they do. Insert pic As RumBlender.nl is an online business, he had his laptop setup so that he can give the class a quick demo of how we can go about creating our own rum blend on their website. The site is pretty snazzy and easy to use, and it was cool to see his creation change colour as he adds, or removes his component blend of rums. Check out www.RumBlender.nl to see it for yourself.

and the other three, were pre-designed blends from RumBlender.nl, which were: 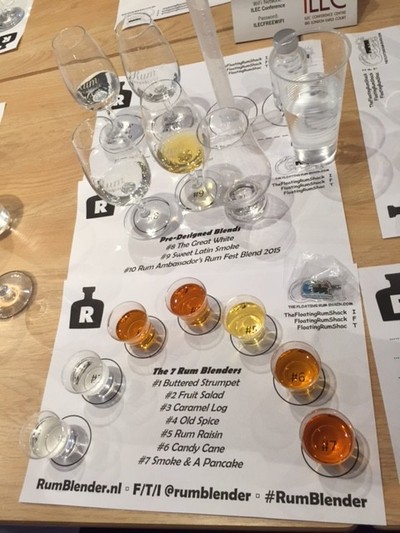 We started by trying the rum labelled #1 until we got to the 7th option. Peter helped us identify the notes from each, as we made our way through the rums. This exercise was to allow us get the flavour profile of each rum, before we went ahead and made our new blend (or blends for some).

Before we were let loose, we got a few tips, so that we wouldn’t completely destroy these great rums, as rum blending obviously requires a basic understanding of the rums that you are going to use, in order to get the best out of your blend. As time was limited, the group got rumming, and we started writing down the names, and various quantities, for each of the rums that we were going to use to make our blend(s). This task was not as straight forward as we thought, we could see ourselves getting quite into the whole rum blending exercise, this was serious stuff! 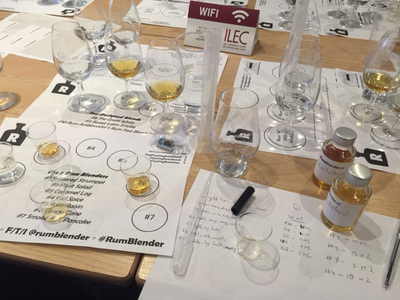 Everyone was asked to give their blend a name, and we got some sticky labels to write them down, and stick to our micro rum bottle(s). With creativity at its best after a few rums… we went for the following names: 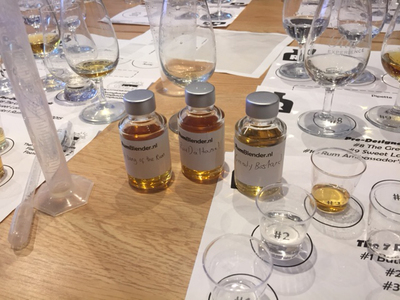 We were happy with our creation, let’s say they were all very different and interesting blends. Number 1 and 3 had a slightly longer finish, and on the drier side than the #2.

Rebecca and I would like to think that we made some of the better ones. Peter suggested that we leave it for a week or so, let the flavours marry together and see if we notice a change in the taste of our creation. We felt like master blenders at the end of the seminar, we took away our personal blends, which certified our newly-acquired skills.

The session ended by tasting the pre-designed blends, and the featured blend: Rum Ambassador RumFest blend 2015. Everyone was very pleased that we were able to keep our special RumBlender rum glass, and the measurements equipment if we wanted to!

We were glad to have signed up for the masterclass; it was fun, informative, and interesting, something that I would definitely recommend to anyone who has the slightest interest in rum, if they have the chance (Hint: Get your RumFest 2016 tickets, hopefully they will be there again!).

We hope we have made you want to find out more about Rumblender.nl, and rum blending in general. Until next time, keep rumming!